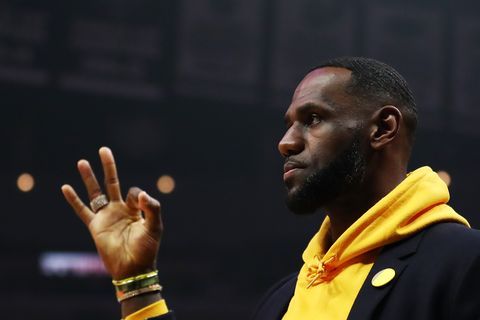 By now, we all know that LeBron James loves working out on Instagram. But he inadvertently became a meme for all the wrong reasons this week, when he shared a video doing a series of increasingly bootylicious squats… and the internet tore him to shreds for his technique. “This is horrendous form,” said actor Michael Rapaport, kicking off a series of third degree burns.

Is his form really that bad? The short answer is: Yes. While LeBron has definitely “optimized” his posture to maximize the amount of butt on camera, he’s also running the risk of doing some serious damage.

“His head is up instead of in a neutral position, so his lower back is in extension; a nice way to develop low back pain,” says Men’s Health fitness director Ebenezer Samuel, C.S.C.S. “You are supposed to push your butt back when you squat, but he is overly focused on keeping his chest up, leading to that big arched back—which is shortening his back extensors and, again, could cause lower back issues.”

“He’s working within the lower body range of motion permitted by his hips at that force angle,” Samuel says. “He should be going lighter, definitely, but if he can’t get deeper because of inflexibilities, fine. He’s driving up strongly enough to get the explosive hip extension benefits of the squat, which is a key benefit of the move. So LeBron could theoretically do a lighter squat and still generate the force needed for the benefit of explosive athleticism without loading like that on the lower back.”

Squats are more difficult for taller athletes due to the length of their femurs, Samuel concedes. “That’s also why tall guys in the NBA wind up with knee issues; their long levers magnify the pains and shearing joint forces that can come with bad mechanics or poor positions on base moves. That makes injuries, both chronic and acute, easier to sustain.” For a safer, easier, and more beginner-friendly alternative, Samuel recommends goblet squats. Here’s a detailed look at how to do the move properly:

Joe Exotic Is ‘Ecstatic’ With His Recent ‘Tiger King’ Fame