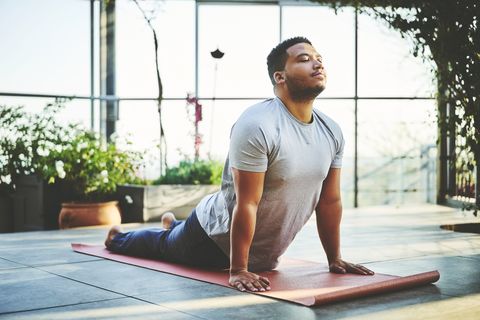 When YouTuber Chase Barron decided to challenge his body by practicing yoga for 30 days, he didn’t know exactly what he might be getting himself into. He did 15 to 30 minutes each day after building a routine by researching the history of yoga and its origins and attending yoga classes to create his own ideal at-home workout.

After completing the 30 days, he had five main takeaways from his practice.

“I didn’t really track anything for this challenge. I didn’t think any external measurements would be very useful or accurate,” he says. “Doing yoga didn’t give me any drastic external changes. The biggest victory with yoga is how I felt all day after doing it. Maybe it’s placebo. Maybe I’m drinking the woo woo Kool-Aid. But every morning after I did yoga, I felt great in my body and in my mind.”

“Everyday, about 10 minutes into my routine after my muscles were loose, I’d be moving from an upward dog into a downward dog, and I would get this crazy crack,” he says. “The back crack was just relieving.”

Check In With Yourself

“I found yoga to be the ultimate way to check in with your body and your mind simultaneously,” he says. “It’s important because your lifestyle and habits play a huge role in your performance in the gym or on the mat. Yoga essentially made me more self-aware, while I was doing the practice and then the self-awareness lasted all day after the practice.”

“The only constant variable that I’ve uncovered from doing yoga in classes and doing yoga on my own, is this: in classes, I pushed myself harder just because I care what other people think of me,” Barron says. “I have a message for my guys out there for my protein guzzling gym bros. It’s not about being the best, it’s just about getting better. It’s just about showing up.”

“Being present with your mind and body is much easier while you’re moving and straining your muscles,” he says. “Movement give you something to focus on. Once you get into shavasana, your body is still, which allows your mind to rise to the surface. Twenty-five percent of the time, you experience a taste of enlightenment. The other 75% of time you lay there after a pretty good yoga session and the thoughts start to take over. You try to grasp onto some sense of stillness, and then you wonder: ‘did I send that email? I should probably take the dog out soon…I’m still worried about the plastic straws and the turtles…”

However, the most important lesson Barron took away from his 30 days of yoga was: All we can do is try our best.

“I did yoga for 30 days, but then I did it for 30 more, and then I kept going,” he says. “Now it’s been nearly three months since the challenge and yoga has become part of my morning routine. I do it almost daily,” he says.

Want to get started on your own yoga journey? Start with these poses, then build your practice from there.

Emily Shiffer
Emily Shiffer is a former digital web producer for Men’s Health and Prevention, and is currently a freelancer writer specializing in health, weight loss, and fitness.

Who Is Rick Kirkham? The Tiger King Producer Has a Wild Story